Vappu was huge. It was wild, it was crazy! The festivities start on the night of April 30th and continue (straight through for some) through May 1. Vappu is Finland's student and labor holiday. In Tampere, it seemed to be skewed toward the student celebrations, though there was a worker parade. Vappu traditions vary from city to city in Finland. In Tampere, the tradition is to dip the first-year technical students into the very cold Tampere Rapids (why only technical students and not all first-year students? I don't know and I couldn't find anyone else who did) . There were two large metal baskets that held about ten engineers each. They very efficiently loaded one with students while dipping the other with a huge industrial crane. The students strip down into their undies and then climb in to the basket. Many of them bring champagne bottles with them, which they dramatically pop open after dunk #1. It's kind of a hazing thing, except a lot the students actually think it's fun to get dipped. One first year student on my soccer team told me that the crane dunked her batch of architecture students six times! I wonder if you can still walk after six dips. At midnight, on April 30, the students cleaned and crowned this statue with a traditional student hat. Only after the crowning, are the students allowed to wear their own hats. They receive their's at the end of the high school equivalent (lukio). The technical students get a tassel during university. Many cities in Finland publish a joke magazine packaged in some sort of industrial container. This year, Tampere rolled the magazines into a caulking cartridge (you know, to be loaded into a caulking gun, to seal the bathtub to the wall). I couldn't really understand the jokes. When I asked people if they would translate one for me, they would say "OK let me find a funny one." And then they would flip through for a while, a long while, not laughing. I got the impression, it wasn't that funny.

In addition to celebrating students and workers, Vappu signifies the beginning of Spring. Thank goodness the weather was impeccable and the bicycles were everywhere. There is a big carnival with the typical carnival stuff and lots of salmiaki (black licorice flavored, sort of) candy. The kids all have large mylar balloons and lots of people go out to lunch on Vappu. So hyvaa Vappua to everyone! and congratulations to the first year students who are now official! It's spring time! These are some students waiting for the first-year student parade. They're sporting their student overalls that color code them by department. 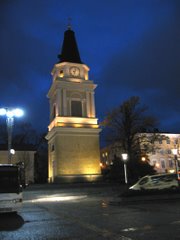 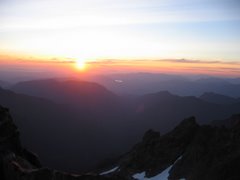 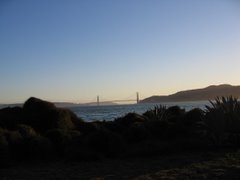 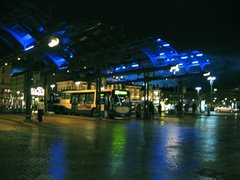 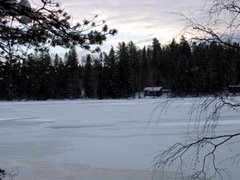